Did Lincoln touch this?

The spinning wheel was a key tool in many homes throughout American history. And the spinning wheel on display at the Carnegie Museum in Fairfield is no exception. This wheel, also known as a flax wheel came from a home in Birmingham, Iowa, just a few short miles outside of Fairfield. 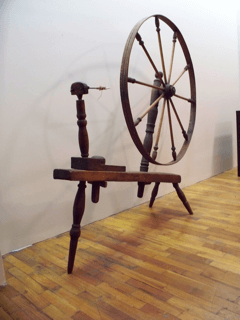 But what makes it different is that the owner of this wheel was Mary Ann Rutledge who moved to the area in 1837. Mrs. Rutledge moved to the area from New Salem, Illinois where she and her husband operated a tavern. It was this very tavern that Abraham Lincoln frequented and eventually fell in love with Rutledge’s daughter, Ann. He courted her and the couple planned to marry. It is even said that Lincoln referred to Mrs. Rutledge as “mom”.

Unfortunately, Ann and her father fell ill with typhoid and they both passed away in 1835, thus breaking the couple’s engagement and Lincoln’s heart. Mary Ann Rutledge shared Lincoln’s grief upon the death of Ann, and in his company would spend long hours at Ann’s graveside. Letters of her kin tell of Mary Ann’s recollections of “the terribly sad look on Lincoln’s face when he came out of the room when Ann was dying.”

Mary Ann was a woman who could have had a fascinating story to tell, had only someone searched it out. She lived to see the suiter of her daughter Ann rise step by step through his amazing career, and she, perhaps better than anyone else, understood the soul of Lincoln when during his Presidency he said, “I have served in the depths… I have been severely schooled.”

Mre. Rutledge’s spinning wheel, the one that was an important part of her tavern and home life in New Salem, made the trek west and eventually landed in the museum, where the local curators can keep this story of Lincoln alive.