Come on a Walking Tour with Us!

Grab your camera and talk a self-guided walking tour throughout the historic downtown and beyond. There's so much history in our local architecture... it's something that makes our little town fascinating to explore! From Romanesque style to prairie style to Streamline Moderne design, the architecture is reflective of eras of Fairfield entrepreneurship.

Italianate in design, this building is a local rarity for having an original facade that is intact. The cast-iron columns and the exuberant arches and capitals were made locally. "LOUDEN M'F'G WORKS FAIRFIELD IOWA" is cast into the bottom of the columns, which predates the Louden Machinery Company - scroll down to see photos. The paneled millwork under the windowsills is unique. Many of the buildings around the square had this style of the storefront in the early days. Typically, an awning was above the store windows, with the sign above the canopy.  Now take a look in the alleyway next to this building. On the side of Revelations Cafe, you will see community art, two murals created by Karla Christensen. Also, see more on our Fairfield Public Art and Maze of Murals webpage.

(This building unexpectedly collapsed in June 2014. Work has started to create a city park here.)

June 12, 1847, marked the start of the Iowa Sentinel, one of the three eldest continuous businesses in Iowa (each started in 1847).

The Tribune Printing Company, a direct lineal descendant of the Iowa Sentinel, and in the Walker family since 1915, printed new catalogs for the Louden Machinery Company. At one time, William Louden was president of Tribune Printing.

Fairfield's Grand Opera House was built on this property in 1890 but was destroyed by an electrical fire in 1909. Before 1980, when the Tribune Printing Company moved into this building, many other businesses were housed here, including car dealers, department stores, food stores, and others.

Painted on the bricks, but covered by metal siding, were the words J. Franklin Produce Co., Cream, Eggs, and Poultry.

The new Fairfield Arts and Convention Center opened in December 2007. See details on their website, www.fairfieldacc.com.

Although it is modern, the design complements the historic courthouse across the street.

The photo below shows how the courthouse is reflected in the front doors.

Energy-efficient materials and methods were used in its construction, following LEEDS certification guidelines.

Walk around to the west side of the building to see the "Jigsaw Puzzle" mural.

The "Jigsaw Puzzle" mural on the west wall of the Stephen Sondheim Center, is an ArtLife Society Project. It was created by Colorado native Eleanor Yates and assisted by several artists from Fairfield.

We hope you are enjoying the virtual tour of Fairfield! We hope you come see us sometimes soon.

The Jefferson County Courthouse made in the stylish Richardsonian Romanesque style, the courthouse design centered on a 142-foot high corner clock tower, but the top and some other details were removed in 1949 because of a fierce wind storm.

In Nov. 2004, a new steeple was installed on the clock tower to substitute the one that was removed in 1949. Lee Gobble's efforts to restore this steeple is told in a Fairfield Ledger newspaper story.

An additional overhaul is taking place in the interior. The courtroom was completed in 2010 - photos on the County website.

The terra cotta bas-relief sculpture on the west wall is an allegory of Blind Justice, flanked by Harmony and Strife. See courthouse photos here and even more here.

Jefferson County Veteran's Memorial, Main Street, on the Courthouse grounds
A memorial honoring veterans from the Army, Navy, Marines, Air Force, Coast Guard and National Guard was dedicated on November 11, 2005, on the west side of the Courthouse lawn. See more photos of the memorial. 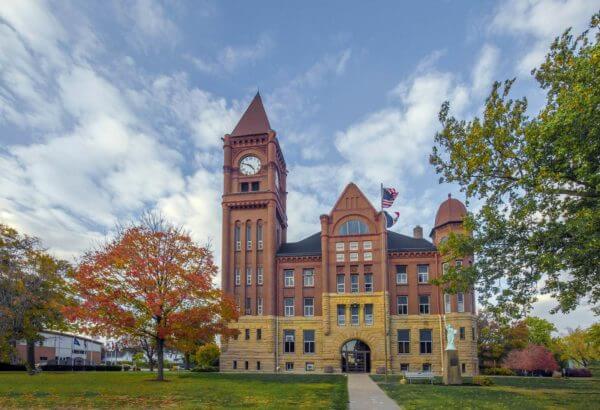 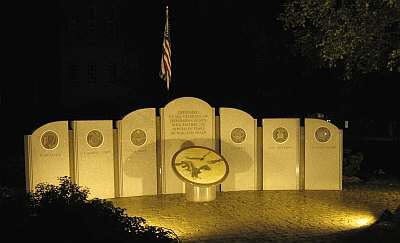 The 1890's Lucien Marcy House is one of Fairfield's grander buildings. Built originally by a wealthy industrialist in the Queen Anne style, it is filled with beautiful detailing, most of which have been preserved.

For many years it housed a business office, and then the Mainstay Inn until recently. 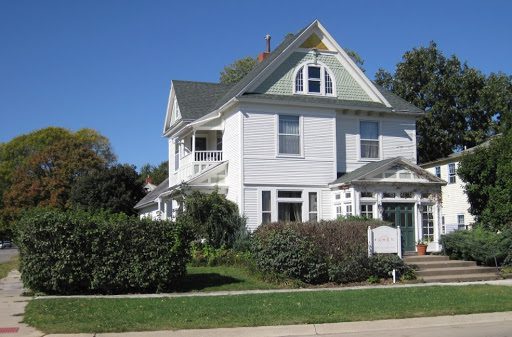 During the Civil War, this land was used as a mustering area (see the plaque in the southwest corner).

In 1912 the Chicago, Burlington & Quincy Railroad bought the land for a new train station and was convinced to give the remaining area back to the city (with the proviso that it remains a park).

It was later named Howard Park in honor of Elmer A. Howard, a vice-president of the railroad.

The first train had arrived on September 1, 1858, a significant event for Fairfield (the original railroad station was at 6th Street). 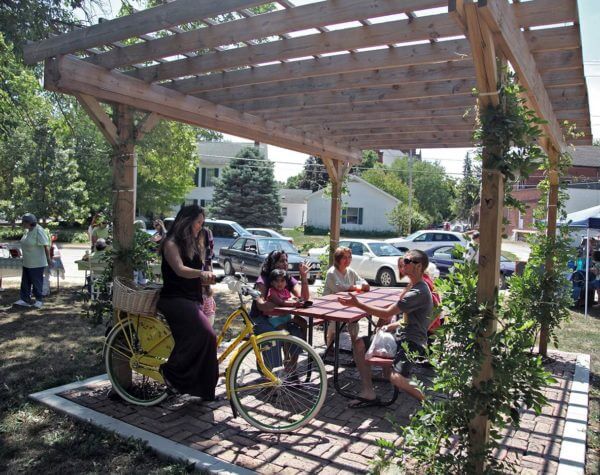 The McElhinny House is one of the oldest buildings in Fairfield. You can find it near Fairfield’s square. The style of the house perfectly fits into the two-story clapboard house-type found throughout the country from between 1830 through 1850.

Construction on the house began in 1846 by Robert McElhinny from Washington, PA. He moved his family here. The house was completed in 1851.

The house follows the late Federal style but has a flare of Greek Revival details.

In 1933, the building was purchased by the Fairfield Women’s Club. It was remodeled and restored to its original beauty. The club used it as their meeting house. 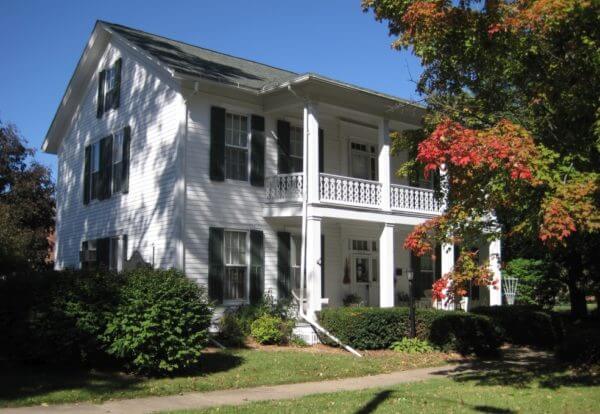 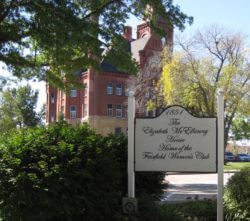 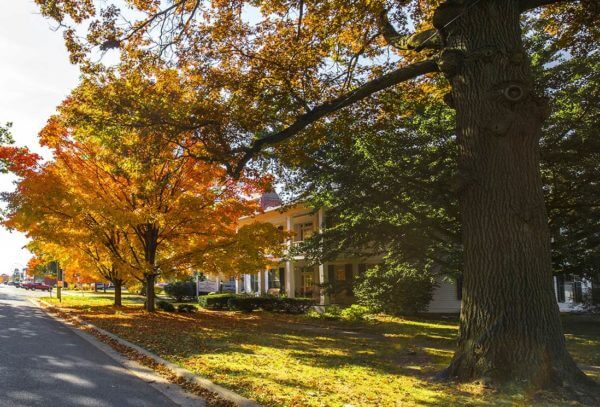 Also near the Fairfield Square, the First Methodist Church was designed in the Tudor Revival Style by Guy Carpenter, an architect with the “Louden Barn Planning Service.”

Something very unique about this building is that Louden included a ventilating system, an early attempt at air-conditioning. Unfortunately, the fans proved too noisy and fell into disuse, possibly because they were not used correctly.

You can view the Louden Ventilator Cupola on the roof, similar to what you might see on the roof of a barn, can best be viewed from the north driveway of the courthouse.

The cupola on the roof of the church - viewed from the north side of the courthouse. 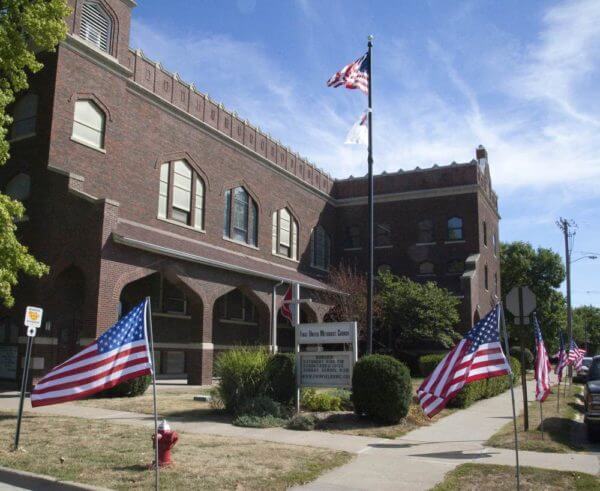 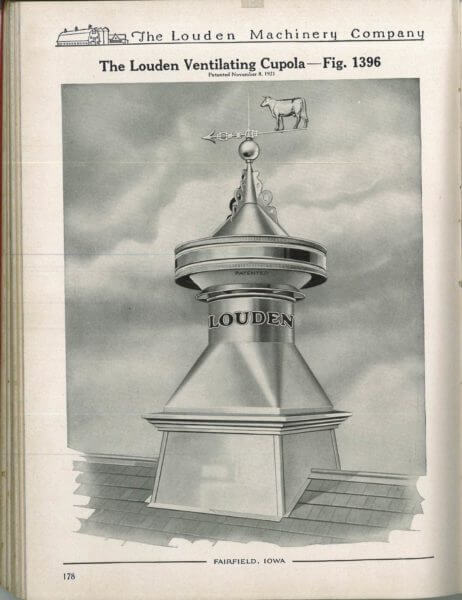 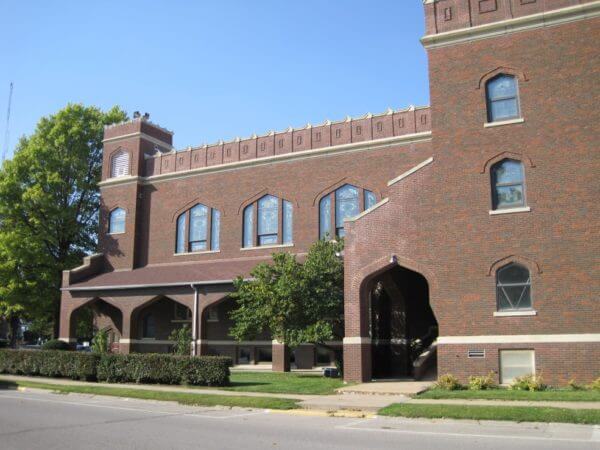 Today, you will find the business Thymely Solutions on the Fairfield Square. It has been there since 1995. The building has previously been home to Firestone Tires, Bread & Chocolate Cafe, a real estate company, and Camelot Toys.

The doors on the building are original to the building. Next time you walk into Thymely Solutions, you can appreciate the sturdy build of these doors. 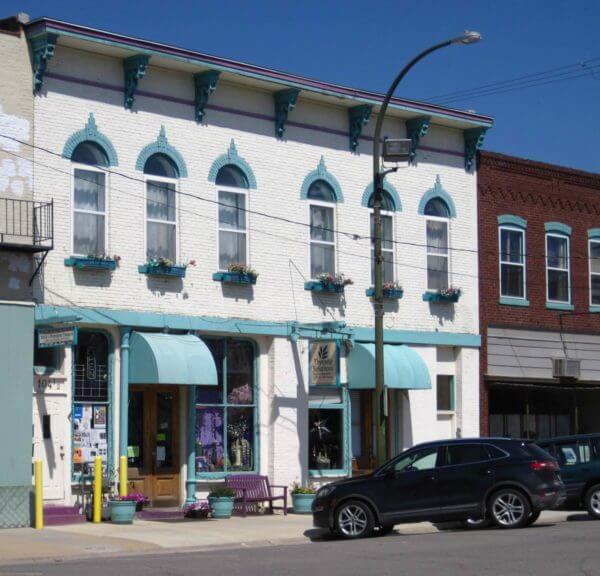 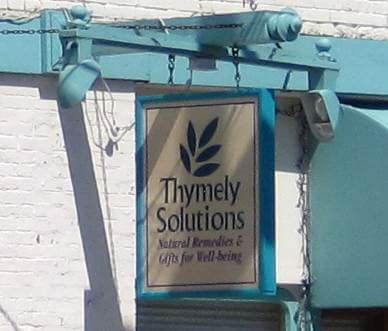 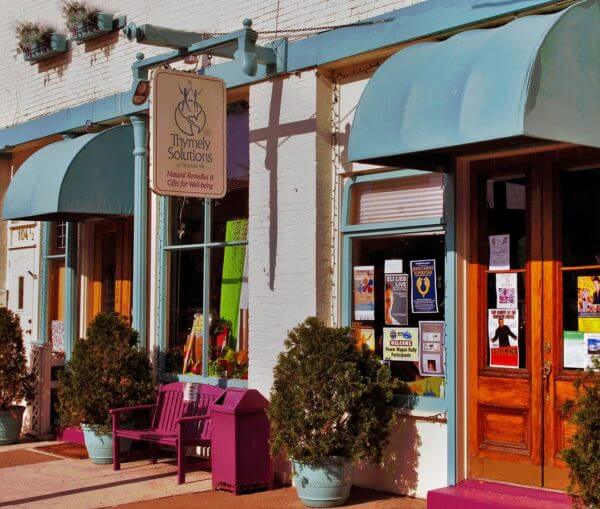 Iowa State Bank was built in 1955 as an excellent example of Streamline Moderne design. It replaced a previous building. You can still view photos of the construction in the bank’s lobby.

On the south side of the building, you will see the original red lettering. The clock and the blond woodwork interior are also original.

You can view some of the similar notes of Streamline Modern design on the Fairfield Community School DIstrict’s High School. 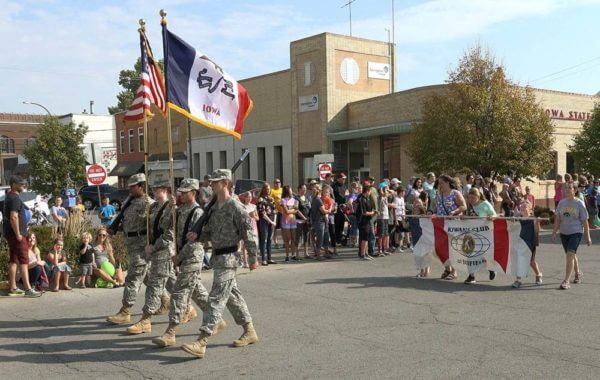 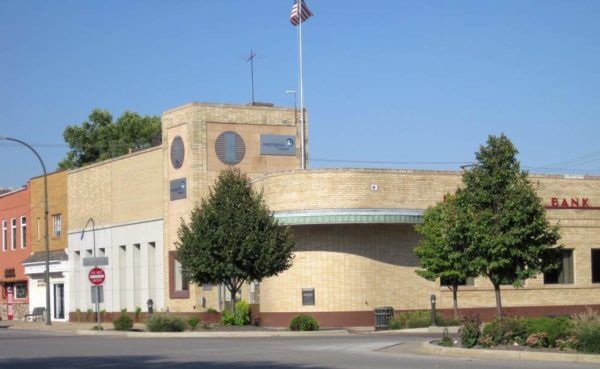 We hope you are enjoying the virtual tour of Fairfield! We hope you come see us sometimes soon.

The Armory, next to the Ledger Building located on the Fairfield square, was built by the Company M of the 54th Infantry of the Iowa National Guard by selling shares of stock to company members and from donations. This building served as the armory until a new armory was built on Stone Street in 1958.

Many events have been held at the armory, the largest of which is a 1934 appearance by Aimee Semple McPherson, a famous female evangelist. Roughly 2500 people waited hours for her to arrive by train from Des Moines. The building is now privately owned. 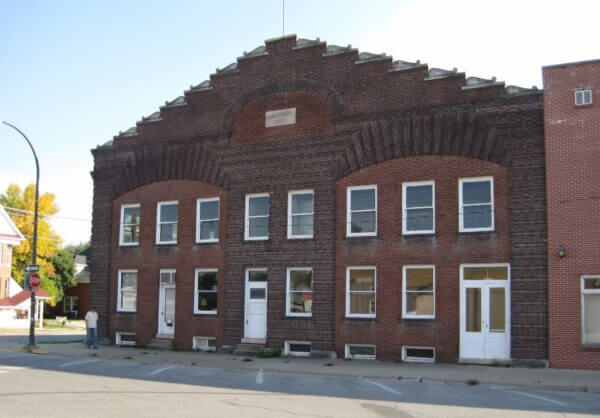 The Wilson Building, on the Fairfield square, is essentially unchanged from its original facade. The building was designed from the classic Italianate commercial facade. It includes cast iron ground floor elevations and bracketed cornices. This building and the one next to it were built by the United States Senator, James Wilson, from Fairfield. 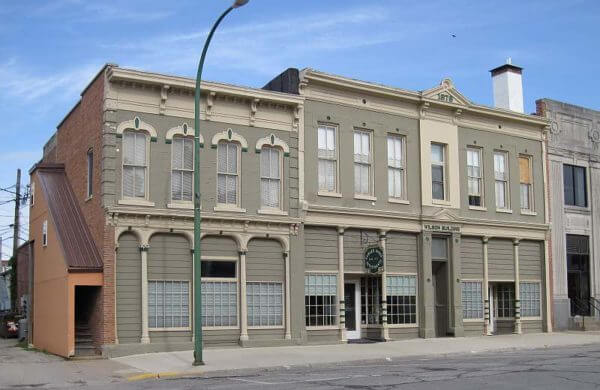 Fairfield’s first library was founded in 1853 by Ward Lamson at 55 South Court Street. The library was located here until 1891 when Senator Wilson asked Andrew Carnegie to subsidize a permanent home for the Fairfield library. This marked the first time Carnegie funded a library but had no personal ties or investments. It led to him funding about 2800 more libraries around the world. Of those, 1689 were in the United States.

The grand opening of the library drew many guests from as far as Des Moines.

The building actually has an underground stream below it. The stream partnered with the heavy Mansard roof to cause the building to begin sinking. In the 1920s, the roof was removed. In the 1950s, the building underwent an extensive stabilizing project.

Carnegie Museum is still located on the third floor. However, the library was moved to a new building in 1996. The museum was recently recognized as an Iowa Century Museum. The museum has been in operation for over 100 years and was recognized for this. It is one of Iowa’s 10 oldest museums. The museum was in existence as early as 1877. 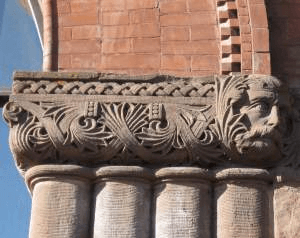 The Thoma-Wood house is now divided into apartments. Its design is strongly Italian with a low-pitched roof, white stone quoins on the corners of the building. You can see the console brackets under the eaves of the roof. 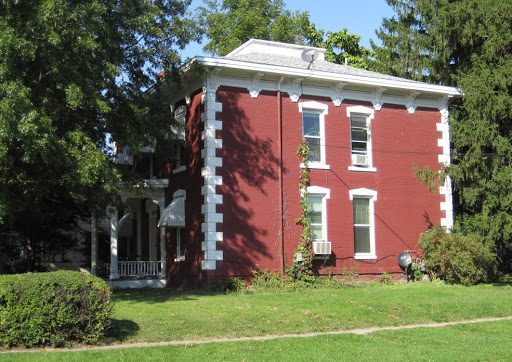 This home was designed by the prominent Prairie Style architect F. Barry Byrne, who worked with Frank LLyod Wright. This home is one of the most architecturally distinctive homes in the Midwest.

During the design of the home, Byrne engaged the artisan Alfonso Iannelli to design the furniture, carpeting, light fixtures, and wall stenciling in order to create a complete environment for their client, Dr. J.F. Clarke. 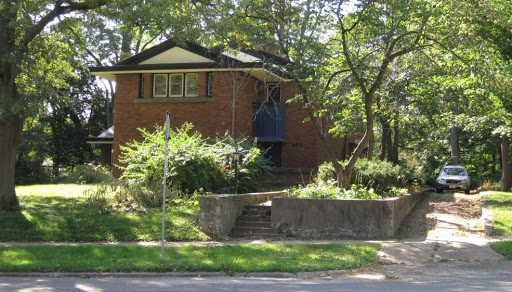 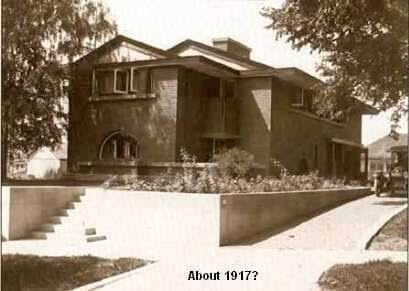 This home was built in the Queen Anne style with a Palladian window in the third story. A ballroom on the third story hosted many social activities. The stones for the foundation of the home came by rail from quarries in Burlington. 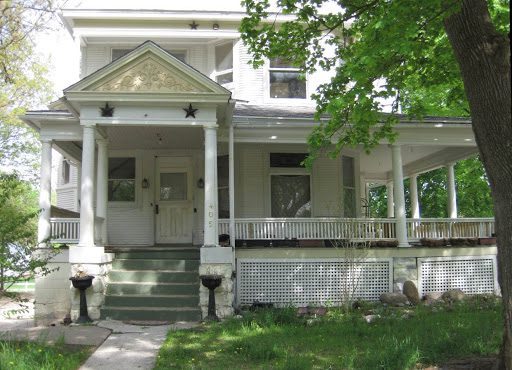 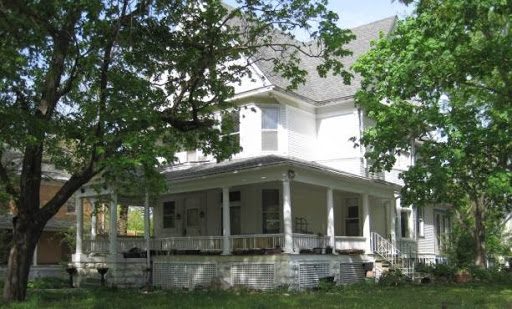 This home is incredibly unique. It is one of the best preserved frame homes in Fairfield. As you can see, the porch decorations are unique for their inventive use of standard late Victorian bric-a-brac. The house has recently been repainted. One of the houses porches is under construction. 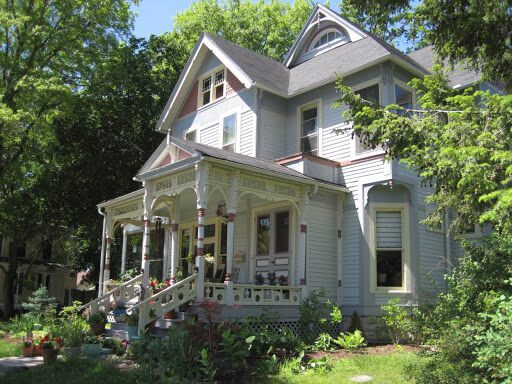 This home is built in a vernacularized Greek revival style combining brick and veneer and frame structure. You can see the incredibly unique detail around the windows, headings built from stone. The front of the structure is balanced by opposing bays, although they are built differently.
Window-header detail of this George A. Wells House, built in 1883. 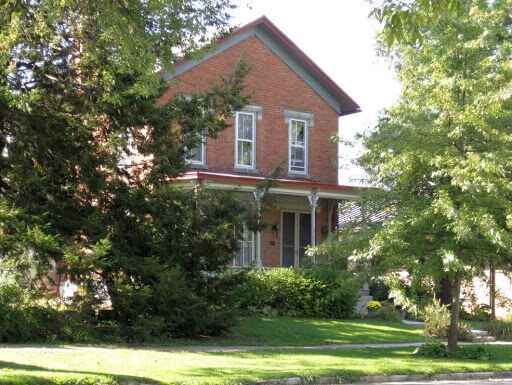 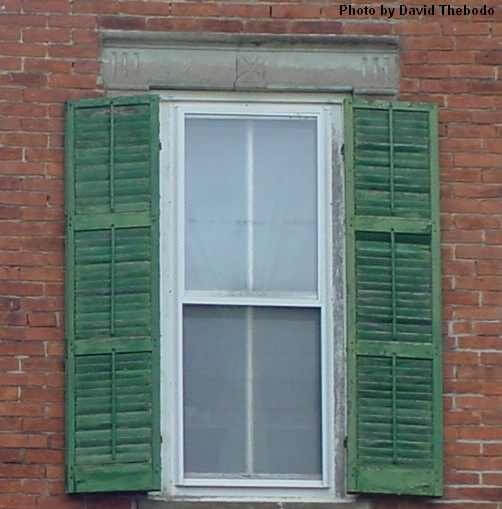 This home, located south of the square, is the only surviving home in Fairfield with scalloped verge boards which is a Carpenter Gothic motif. It was then a restaurant serving buffalo burgers but has since closed.

R.B. and Lizzie Louden purchased this home in 1897, but the home was built in 1871. The owners of the home between 1928-29 remodeled the home, removing the original open, wrap-around porch. It was replaced by an enclosed sun porch and formal entrance.

Where once a barn stood on the north side of the house, a two-story brick garage designed by the “Louden Barn Planning service” was built. In the 1970s, a one-story garage was built next to the two-story garage. The doors on the garage (saying “Around-The-Corner”) offer a space saving feature of roller bearings, adjustable trolleys, and a high carbon steel track. These doors are no longer used. 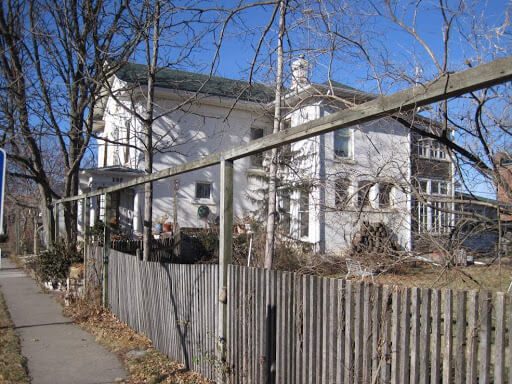 For more information about any of these buildings and structures, click here.

Thank you to Werner Elmker for contributing so many beautiful photos!