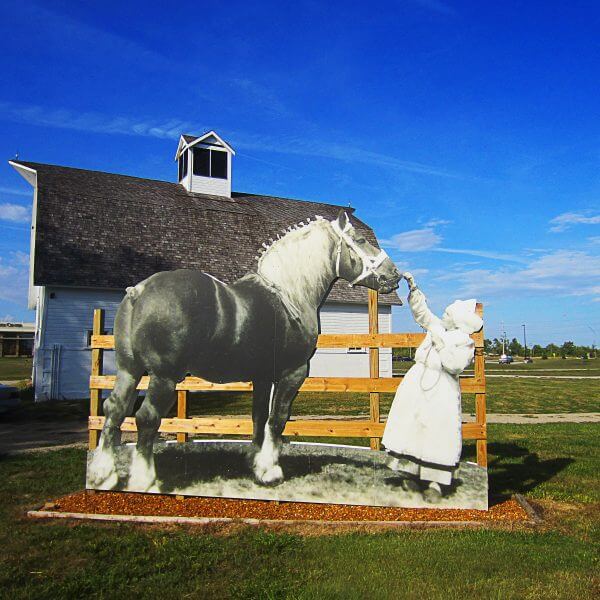 This historic site tells the story of early agriculture from the 1900s. Many of the exhibits chronicle Jefferson County’s industrial enterprises in the 19th and 20th century, including the Maasdam draft horse breeding business, Louden manufacturing, and their agricultural inventions, and Turney Wagon Works, manufacturers of rugged farm wagons and advertised as “Built for Wear and Savers of Horse Flesh”

In 1906, Jacob Maasdam made a two-day journey bringing 47 Percheron horses and one Shetland pony from Pella to Fairfield, turning Jefferson County into one of the great original horse markets of the country, including many world champions, the most notable being Louis d’Or, reportedly the world’s largest Belgian horse.

The historic Maasdam Barns at the Evergreen Ridge Stock Farm are a significant illustration of an early 20th-century draft-horse breeding business. From 1910 until 1938 award-winning Percheron draft horses were raised and sold by J. G. Maasdam. The two 1910 barns were designed by the Louden barn design division. They used modern barn construction methods, such as poured concrete walls, and featured Louden barn products.

The Maasdam Barns are open from mid-April  to mid-November
Hours are 1-4pm Tuesdays and Thursdays, and 10am-4pm on Saturdays.
In addition, tours are available by appointment.

Located on Hwy 1 south, just past the hospital.