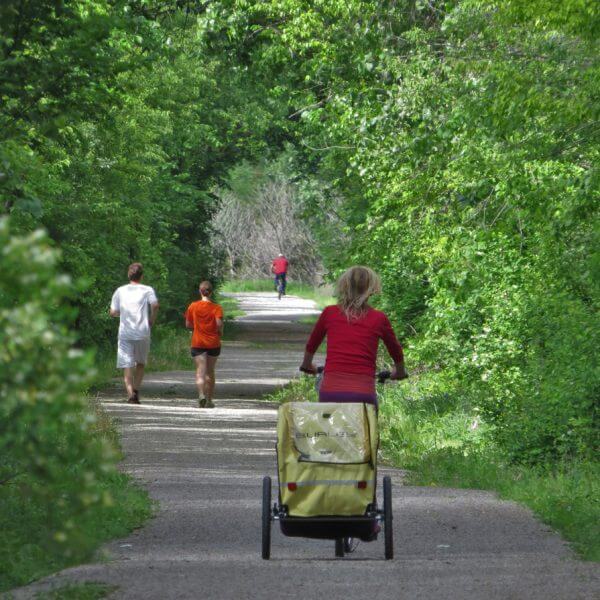 The Fairfield Loop Trail forms a 16-mile ring around the town of Fairfield, mostly in the outlying areas of the countryside. The trail links two major preserves and connects city and county parks. Along the way you’ll pass through woodlands, meadows and prairie, and hilly sections.

Most of the trail surface is crushed stone, but there are about 2.5 miles total of concrete surface in four different locations. A 0.8-mile on-road segment follows Mint Boulevard (a gravel road) southward from Lamson Woods toward the trail section that parallels US 34. Other trails, such as the 7.5 miles in Jefferson County Park, connect to the Fairfield Loop Trail.

The most spectacular feature of the trail is the BNSF bridge over the railroad tracks near Walton Lake. The bridge features 171 ceramic tiles created by high school art students, which are inset into the bridge’s concrete curb. Many small bridges, some with artistic enhancements, cross brooks on the Fairfield Loop Trail.

Because the 15.9-mile-long Fairfield Loop Trail was built one segment at a time over 14 years, names were given to each segment.  The segments are presented in a clockwise direction, starting with the DOT-South segment in the southern part of Fairfield, Iowa.

The DOT-South segment, built by the Iowa DOT, parallels the new US Hwy 34 bypass from Mint Blvd in the east to Whitham Woods in the west.  This 5.7-mile segment is hilly, with curves and woods, and partly in wetlands.  It intersects with the Cedar View Trail, which leads to Jefferson County Park.  The Loop Trail officially begins (and ends) next to the Maasdam Barns at Mile Marker Zero.  Mile Markers occur every 1/4 mile along the Loop Trail.

The Whitham Woods segment uses part of an old 1858-1901 railroad bed, then travels up and down hills through the woods, and then follows a concrete section along Burlington Ave to Brookville Road.  The trail within Whitham Woods was upgraded in September 2010.

The Northwestern segment travels northeasterly from Brookville Road to Grimes Ave and Dexter Soccer Park, then crosses the BNSF railroad track through a pedestrian maze (for safety) and continues to the Rock Island Railroad segment at 8th & Gear.  Most of the surface is concrete.

The B Street segment travels along B Street on a concrete-surfaced sidewalk for 4/10ths of a mile to connect to the Lakes segment.  The sidewalk continues southward to Waterworks Park and Stone Ave.

The Lakes segment connects three lakes, Bonnifield Lake, Pleasant Lake, and Walton Lake, with a trail that meanders along fields and through wooded areas.  These lakes are retired reservoirs, being converted for recreational usage.

Leaving Walton Lake, the Louden Bridge segment travels through woods, then crosses the BNSF Railroad tracks on the 246-foot Louden Bridge to connect with Chautauqua Park, where it meets the Crow Creek segment.  The Louden Bridge displays 171 ceramic plaques of images from old Louden Machinery Company blueprints, made by a Fairfield High School art class.

The Crow Creek segment follows Crow Creek from Chautauqua Park to the Neff Wetlands.  A concrete-surfaced section connects to a crushed limestone surface in a wooded low-land, where three bridges cross creeks in the Fry property.

The Neff Wetlands section of the Loop Trail begins as you cross Glasgow Road from the Crow Creek segment, heading west across the wetlands dike.  The Lamson Woods boardwalk/bridge then takes you the parking lot at Mint Blvd.  A walking-only trail joins the boardwalk near the creek.  Lamson Woods is a State Preserve.

The Mint Blvd Link connects the Lamson Woods-Neff segment to the DOT-South segment, using Mint Blvd, the only shared-road section of the Loop Trail.  Part of Mint Blvd is steep, with a gravel surface.  Improvements may be made in the future.