Willow & Bright is an online women’s clothing boutique that is custom curated with the busy working mom in mind. We strive to offer work appropriate options that are stylish and easy to care for, as well as super cute options for when you’re off the clock.

Wanderer’s Haul is a local game store. We strive to provide a safe welcoming space to hang out, play games, and meet people with similar interests. We have a wide variety of games and accessories, including accessories from local creators. Wander in and check us out, adventure awaits!

Check out one of Fairfield’s coolest hangout spots, The Mad Hatter. At the Mad Hatter, we have 5 Diamond Pool Tables, a full bar, and delicious food, all aimed to satisfy.

Nisan and Helenee Alva moved to Fairfield from a small kibbutz in Israel a few years ago. Nisan is also the chef at Hungry Camel and has been in the Restaurant and catering business for over 15 years. Mostly preparing steaks at a top steakhouse in Israel. His love for preparing fresh and delicious food shines at Hungry Camel which is serving authentic Middle Eastern street food and comfort food.
The most popular dish is the Falafel in Pita. Falafels are made fresh and are delicious and the pitas are baked in a local bakery. The falafels are truly one of a kind!

Elm Grove School, Center District # 4, is one of 400 one-room country schools left in Iowa and is currently located on the grounds of the Jefferson County Fairgrounds.  The first schoolhouse was a log building. When the people got together to build the log house there were so many elm trees where the building was built that they called it Elm Grove. The school was surrounded by bushes and brush and Crude benches and a fireplace were all the equipment they had. From 40-60 students attended this school. The present school building was built in 1866.

Our “ Greek / American Mix “ has something for everyone. From delicious Gyros, Burgers, Steaks, Sandwiches, Chicken, Salads, or Authentic Greek food we offer a variety of food options. The lounge is also available. 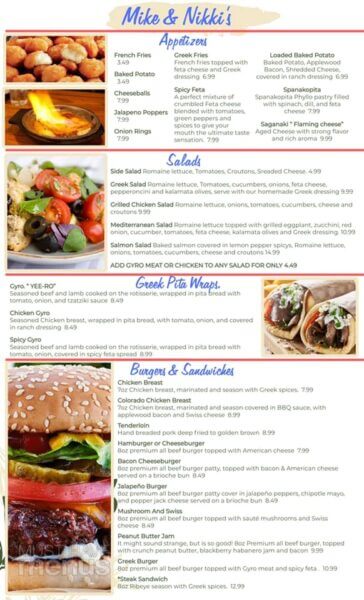 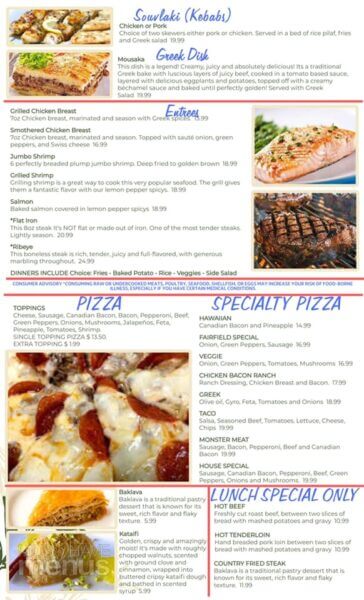 Native prairie restoration continues on the 48-acre plot of land between Waterworks Park and Pleasant Lake. The land is known as the Nady property because it was donated to the city by the Nady family. This area is being converted into native prairie grass, wetlands, and forest and will provide access to the west side of Pleasant Lake.

NadyKioskSign PrintFile1
Excerpts from article by Ron Blair in the Iowa Source, June 2021:

Little Prairie on the Trail: Take a Walk on the Wild Side

The Fairfield land Bob owned had been in the McElhinney-Nady families since 1844, and although he was an absentee landlord (the 50 acres were cropped by a tenant farmer), he had withstood the onslaught of developers eager to create high-end residential housing. “Maximizing the value of the land” is how they put it. Because the land is prime real estate located between Silver Lakes and Lakeview Estates, it was valued at over $1 million.

But Bob wasn’t interested. Named after his maternal grandfather, Robert McElhinney, one of Fairfield’s founding citizens, he was emphatic that the land would never be sold for development or altered from its original state.

An early ad for X. Nady & Sons says, “We are Natives of France, Speak the Language, and do our Own Buying and Importing.” Bob came from solid stock: his paternal grandfather, Francois Xavier Nady, immigrated from the Alsace region of France and was the first importer of Percheron draft horses to Southeast Iowa. I put Bob in touch with the Iowa Natural Heritage Foundation, the state’s pre-eminent conservation organization, and together they crafted a conservation easement, now held by the Jefferson County Conservation Board, that protected the land in perpetuity. It would never be built upon.

When Bob’s health began to fail in 2011, he and his family deeded the land to the City of Fairfield. After the appraisal report was received, I feared his family might not support his altruistic motives, but they backed his decision to donate the land without hesitation. Next, a mayor-appointed committee sprang to life and decided to restore the land to its original state, Iowa prairie. Yahoo! A big win for biodiversity and environmentalism.

But how to accomplish such a feat and where to obtain funding? Small towns don’t readily possess funding for such projects. The answer came from Doug Ensminger, of the local office of the Natural Resource Conservation Services (NRCS), a federal agency. The Nady land, Doug explained, having been farmed for decades, was eligible to apply for Conservation Reserve Program (CRP) status, a federal land conservation program. In exchange for a yearly rental payment, a landowner agrees to remove environmentally sensitive land from agricultural production and plant species that will improve environmental health and quality. Bingo!

The next step was to find a landscape architect who understood prairie restoration and design. Sources led us to Steve Brower from Burlington, an adherent of Otto Leopold, who had the knowledge and passion to work the Leopold philosophy within the required limitations of the CRP program. Alakazam! A Leopold mix, containing over 100 native Iowa grasses and forbs, was planted. Trails were planned, a master plan conceived.

The now-named Nady committee, with a diverse and knowledgeable spectrum of personalities and specialties, forged ahead. Kevin Andersen, DNR, was particularly adept at finding the right balance of seeding and mowing with weed burning. Mark Smith, owner of The Ride, is a professional burn specialist. Shawn Morrissey is director of the County Conservation Board. Naturalist Brittney Tiller and educator Kari Bede were essential to the development and strategy of sign design and placement.

Petra Park, Fairfield’s sophisticated and urbane new plaza with eating areas and performance art space, is a fitting memorial for Petra Stanley, who died of cancer in 2016.
The formerly empty lot has been transformed, with welcoming red benches and raised plant boxes around the perimeter. Along one side is a long table for dining or visiting that can be used by visitors to get acquainted during their time in our community. The pergola in the center of this area features an oak leaf sculpture crafted from wood and metal which was inspired by Fairfield’s history as an oak savanna.
The Mirror With a Barre has been the most popular attraction at Petra Park, thanks to its highly polished stainless steel surface. People love it so much that they often stand in front of it for hours at a time and enjoy practicing their dance moves before an imaginary audience.

I’m Paul Squillo. I design, sell, install and calibrate high-end audio and video systems, for over 46 years! …starting from amazingly refined low-cost/high-value equipment, to State-of-the Art audio and video.
Have an old system that needs to be set up or fine-tuned? Did you buy an HDTV from a big box store or the Internet that you know should look a lot better? I can help!
I’m now on the square here in Fairfield, just around the corner, next to Thymely Solutions on Court Street.
My new open hours are 10am-Noon, and 1:30-4:30pm, Tuesday, Thursday and Saturday. If I’m here on the other days, my door will be open. This way I have time in the week to do your in-home consultations and installations.
My phone is on the door, and I’m often only minutes away. So call or text me at 641-455-6727 for an appointment.
I’ve brought a tweeter/midrange technology with me from LA that allows me to create the first speakers ever to perfectly combine detail, imaging and refinement with powerful live dynamic impact!
And with Elac, and RBH speakers, I can give
you serious speakers starting at $199/pair.
We live in the most creative town in the state. Don’t you deserve an AV system that keeps up with your live musical experience?